This phenomenon is called multipath. It causes meter-level error on the measured satellite distances (pseudoranges and carrier phases), and it significantly degrades the position and time accuracy.   Oftentimes, multipath is the dominant error source in GNSS applications.

The error caused by multipath on each individual pseudorange can be monitored in real-time in Septentrio’s RxControl application, by opening the MPx Time Plot. Multipath errors tend to exhibit an oscillating pattern, with amplitude at the meter level, as illustrated below in a screenshot from RxControl.

The following figure shows the difference between the pseudorange error when APME+ is disabled (in blue), and when it is enabled (in green).  APME+ reduces the error by more than a factor 2.

Figure 3 below shows the effect of APME+ on the position accuracy in DGNSS mode. 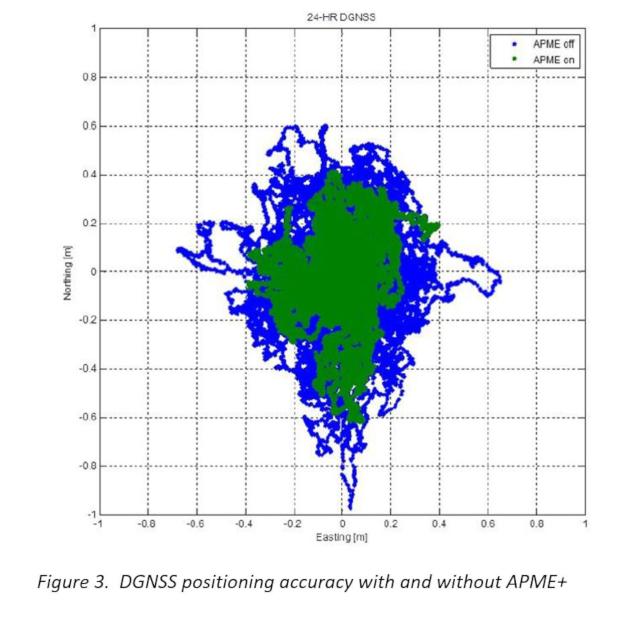 APME+ is enabled by default in all Septentrio receivers.

Reflections from nearby surfaces (roof, ground, building, etc), are the most prevalent and also the most treacherous.  Signals reflected by nearby surfaces (<20m distance) arrive at the antenna with only a short delay compared to the straight signal.  They are therefore difficult to differentiate from the straight signal and many mitigation algorithms do not perform good against them.  APME+ on the other hand is specifically designed to address short-delay multipath.  This is illustrated in figure 4, showing the multipath envelope for the GPS L1 CA signal.  The multipath envelope shows the error resulting from a reflected signal with a given delay.  As can be seen, APME+ has the smallest envelope for short delays.

A common issue with other multipath mitigation techniques is that they introduce biases in the measurements.  This is because they require modifying the correlators inside the tracking channels, thereby modifying the point at which the receiver locks onto the GNSS signals.  This is known to introduce satellite-dependent biases.  In many cases, these biases are unacceptable.

On the other hand, APME+ is by design free of any bias.  APME+ estimates the multipath error in real-time without modifying the underlying tracking loop.  The multipath estimate is high-pass filtered before being subtracted from the pseudoranges and carrier phases.   The high-pass filter guarantees that APME+ does not introduce measurement biases.

Another nice thing about APME+ is that the multipath correction applied by the receiver to all individual pseudoranges and carrier phases is available in the SBF messages. So, users interested in getting more insight into how APME+ works can effectively see what correction the receiver has applied, or can even undo the corrections to recover the raw unmitigated measurements.