The ionosphere, scintillation and satellite signals

Signals from GNSS satellites travel the majority of their 20,000 km journey to Earth largely unhindered. However, refraction and diffraction of GNSS signals in the Earth’s atmosphere, particularly the ionosphere, an electrically charged layer between 100 and 1000 km above the Earth, can result in delays and distortions to the signals.

As the name suggests, the ionosphere contains particles that have become charged, or ionised, as a result of interactions with high-energy particles from the sun. When these ionised particles are smoothly or homogeneously distributed, GNSS receivers can take into account the effect they have on satellite signals using models. Problems arise when there are irregularities in the ionosphere. These irregularities are localised fluctuations in the electron density of the ionosphere and can distort the phase and amplitude of GNSS signals producing fluctuations known as scintillations. Ionospheric scintillations (IS) are typically characterised by two indices: 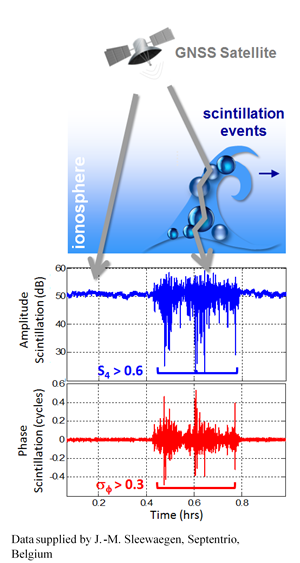 Scintillation events are most frequent and intense in the regions around the magnetic equator and also, but to a lesser extent, at the poles. Similar to other natural phenomena, their appearance is unpredictable with scintillation events having been reported in the mid-latitude regions of Western Europe and the United States. 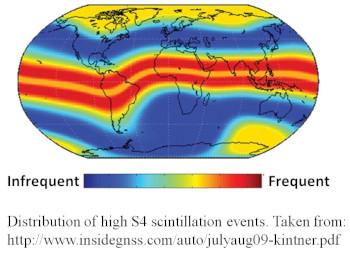 The activity of the sun, as measured by the number of sunspots, follows a well-documented 11-year cycle. The peaks in solar activity are characterised by frequent solar flares releasing powerful bursts of high-energy protons and X-rays. These particles then interact with the Earth’s atmosphere contributing to an increase in scintillation events in the years close to solar activity peaks. Scintillation events also show variation over the course of the day with sunset triggering a sharp increase in ionospheric activity that can last for several hours. 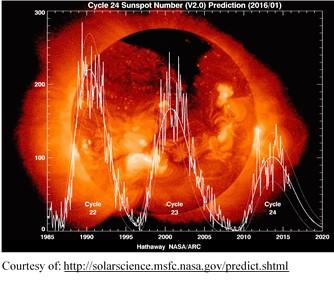 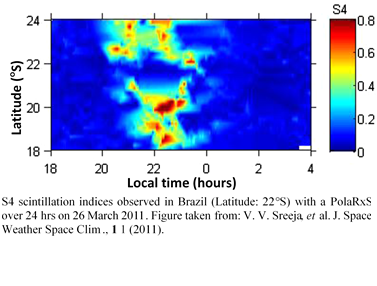 Scintillation events also show variation over the course of the day with sunset triggering a sharp increase in ionospheric activity that can last for several hours.

What does scintillation mean for GNSS positioning?

GPS or more generally, GNSS (Global Navigation Satellite System) receivers use the signals from satellites orbiting the earth to calculate their locations. An increase in solar activity can produce so-called scintillation events in the ionosphere which can degrade the quality of satellite signals. In standard GNSS receivers, mild scintillation can degrade position accuracy by up to several meters. More severe scintillation can cause cycle slips or, in the most extreme cases, total loss of signal lock. During these times, even normal radio communication can be severely disturbed by scintillation. So, whether you are doing precision agriculture in Brazil, oil exploration in Alaska or running a large construction project in Singapore, you had better make sure your precision GNSS system comes with ionospheric robustness built in.

As a direct result of involvement in various projects in Brazil, a country typically plagued by scintillation, Septentrio has developed IONO+ technology. Equipped with IONO+, Septentrio receivers can continue to track signals in conditions that would frustrate standard receivers. It also enables Septentrio receivers to recognise scintillation events and limit any adverse effect they might have on position accuracy. The plot above shows the height calculated by a static receiver during a scintillation event: the IONO+ algorithms correctly identify and remove signals affected by scintillation from the position calculation.

The purpose of IONO+ technology is to mitigate adverse impact of both normally active and scintillating ionosphere. With standard RTK positioning a network of reference stations is typically required to interpolate ionosphere delays and compensate for them at the rover. With IONO+, ionosphere delays are estimated internally, and no network is needed. A single reference station with a baseline up to 40 km is sufficient, and even up 80 km, if ionosphere is quiet.

For more details and examples see our technical paper: CALIBRA: Mitigating the impact of ionospheric scintillation on Precise Point Positioning in Brazil.