The weakness of the GNSS, signals makes them very vulnerable to radio frequency interference which can directly impact the quality of your measurements and the reliability of positioning. Even GNSS frequencies which are legally protected for military and civilian radio-navigation use are not immune.

These disturbances are usually very weak and your GNSS receiver is capable of extracting the necessary data from the GNSS signal. However, in many cases, the interference effect is more noticeable.

For example, radio navigation for assisting aircraft navigation and landing share their radio spectrum with one of the GNSS signal bands. The L5 band which has a centre frequency of 1176.45 MHz is shared by Distance Measuring Equipment (DME) and Tactical Air Navigation (TACAN). These radio beacons are deployed in the areas surrounding aerodromes and emit high-power radio pulses which can disturb GNSS receivers trying to use GPS and Galileo signals in this band.

At Septentrio, we devote considerable attention to interference throughout the design of our equipment. Working with customers over many years to solve real problems, we have developed Advanced Interference Mitigation (AIM+). These algorithms counteract the effects of interference. AIM+ is a standard feature of all Septentrio’s receivers including our reference receivers.

AIM+ minimises the effects of continuous wave (CW) and narrowband interference on receiver performance. In the identification stage, the adaptive notch filter continuously scans the incoming signals for the presence of an interferer. Whenever an interferer is detected, the signal is digitally processed such that the interferer is suppressed.

One key element of AIM+ is the set of adaptive notch filters to target and eliminate narrowband interference on receiver performance.

A conceptual diagram of the adaptive notch filter is shown below. 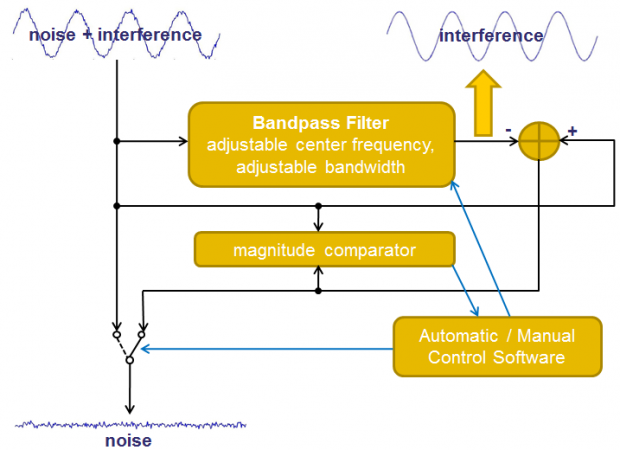 Note that AIM+ can incorporate one or several adaptive notch filters, depending on receiver type. The core of the adaptive notch filter is a digital bandpass filter with an adjustable centre frequency. When an interferer is detected, a software-controlled switch (see above Figure) routes the filtered signal to the remainder of the signal processing engine (suppression stage) instead of the input signal. During the suppression stage, the filter bandwidth is narrowed down and its centre frequency is fine-tuned. The installation process of the notch filter, including the fine-tuning of its bandwidth and centre frequency, is fully automated. If required, user controlled manual operation is also possible.

Septentrio has won many tenders due to its advanced and industry leading interference mitigation. It has become the “preferred reference station vendor” to UNAVCO. In commercial testing of the PolaRx family with competitors, UNAVCO mentioned that:

“Configuration of a notch filter to mitigate the interference was well documented and the effect of the filter was visible in the control software. The spectrum view feature can help users to rapidly identify the sources of RF noise and mitigate the using the built in mitigation tools”.